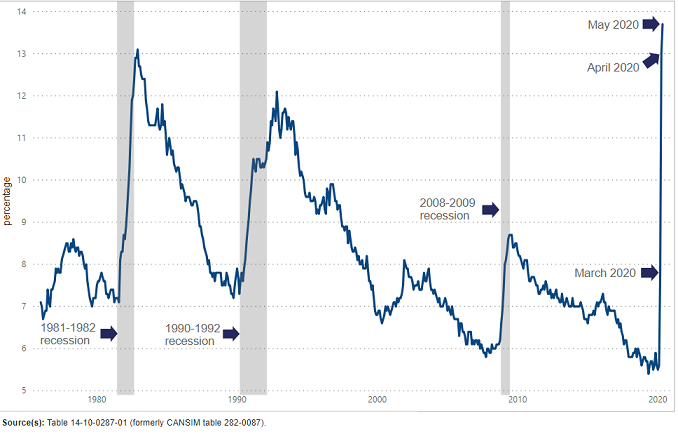 Our current social safety net is based on the goal of full employment, driven by monetary policy (interest rates) and fiscal policy (deficits and surpluses). It's primarily targeted at people who can't work - the elderly, children and single parents, the disabled - and people who are temporarily out of work. There's welfare payments for people who don't fall into any of these categories, but they're generally regarded as inadequate and a last resort.

A Universal Basic Income (also known as a Basic Income or a Guaranteed Annual Income) - giving a livable income, say $2000/month, to everyone - is an idea that has been around for a long time, and that has many enthusiastic advocates. They argue that it'd be simpler than the existing system, since it wouldn't require determining who can work and who can't, and that a lot of the funding could be provided by dropping the existing programs. It would give recipients far more personal security and freedom - they would no longer have to go to work to pay the rent, and so employers would have to offer higher pay or more meaningful work.

The big question is, how do we pay for it?

If we can pay for CERB by having the Bank of Canada print the money and buy government bonds, can't we do the same for UBI? No, unfortunately. You can print money to pay for temporary spending, like CERB (paying it back afterward, like wartime debt), but not permanent spending, like UBI. As Paul Krugman points out, printing money puts downward pressure on the unemployment rate: the recipients use the additional money to buy more goods and services, and producing those goods and services requires more workers. When unemployment is high, this isn't a problem. But once we're back at full employment, unemployment can't drop any further (there aren't any more workers to produce those goods and services), and so instead you get inflationary pressure and higher interest rates.

This is true of any permanent program, not just UBI. Whenever anyone proposes new permanent spending, we also need to figure out how to raise more tax revenue to pay for it.

For UBI, Jonathan Rhys Kesselman has run the numbers, and it doesn't look feasible at all. Although it's possible to redistribute income to a relatively small number of people who can't work, UBI requires spreading that income over a far larger number of people, resulting in either too little income to live on (especially for the disabled), or improbably high tax rates.

Unfortunately, despite its simplicity and attractiveness, UBI is unworkable. Stephen Gordon compares UBI to a perpetual motion machine: when it's impossible to build one, it's not productive to spend a lot of time talking about how awesome it would be.

Targeting income support at people who can't work, or who are temporarily out of work, may seem complicated. But that complexity is necessary. As Mencken says, for any complex problem, there's a solution that is simple, neat, and wrong.

I'm not sure supporters realize just how huge the cost of a UBI would be. A Universal Basic Income of $2000/month x 35 million people = $840 billion, which is 50% of GDP. Existing government programs across all levels of government are about 40% of GDP, and presumably we'd want to keep the big-ticket items, like education and health care. Spending 40% of GDP on public services is doable. 45% doesn't seem too bad. 90%? No way.

In contrast, the net cost of replacing the UCCB and the Family Tax Credit (Harper's income-splitting tax credit) with the Canada Child Benefit was about $2 billion, or 0.1% of GDP. And that brought down the number of children living in poverty by 700,000, or about a third!

UBI supporters want to help people, which is totally admirable. And the rapid response to Covid makes radical changes seem far more possible. But given the huge expense of UBI, I think it makes much more sense to target income-support programs at the relatively small number of people who can't work.

There’s room to make existing cash transfer programs more generous, and is worth doing. But a full blown Basic Income is such a bad idea. We should prioritize our spending on addressing Canada’s five biggest challenges, listed below.

(2) Demographic change and an aging population.

(4) Persistent structural barriers to full participation in the economy and society.

(5) Housing affordability and availability, particularly in our most economically dynamic cities.