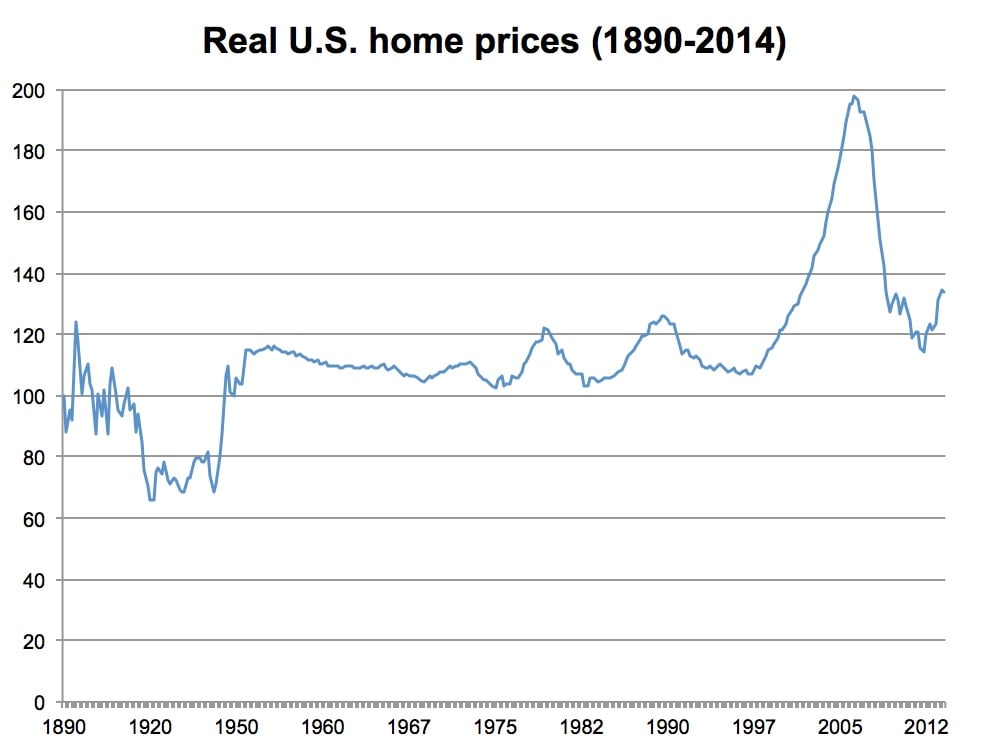 We can see what's going to happen to Canadian house prices - we saw the US housing market crash. We just don't know when.

Economist Robert Shiller has US house price data going back to 1890. After you subtract inflation, over the long term prices are basically flat, with some spectacular rises and falls along the way. Why? Buildings age and become dated, so their value declines over time; it's the land that's important, and the US is not running out of land. If land becomes super-expensive in a particular city, there's a safety valve: people can move to smaller cities (as we're seeing now in Canada).

This suggests that what we're seeing in the overheated Canadian real estate market - especially in the GTA and Metro Vancouver, but now spilling over into other markets - is what Shiller calls a "natural Ponzi scheme." The basic idea is that something (e.g. a fall in interest rates) causes prices to rise. People notice and jump into the market, driving up prices further. This in turn draws an even bigger crowd ("there's nothing so disturbing to one's well-being and judgment as to see a friend get rich").

What drives this dynamic is our expectations that prices will keep going up at a rapid clip. A homeowner has to move, and instead of selling their old place, decides to keep it and rent it out, betting that prices will be higher a couple years from now. A real estate investor decides to double down, borrowing against their existing portfolio to buy more properties even if they're cash-flow negative, figuring that they'll lose money for now but make money when prices go up further and they sell. An aspiring homeowner borrows to their limit, or goes to an alternative lender, fearing that if they don't buy now, prices will be even further out of reach in a couple of year.

But what we can see from the US crash in 2008 is that just as with a Ponzi scheme, eventually you run out of new buyers: everyone who can buy has already done so. Prices stop rising and begin to stagnate. Some people who borrowed heavily in the expectation of rising prices (like the cash-flow-negative landlords) find themselves over-extended, and after grimly hanging on for a few years, are forced to sell. As prices gradually decline, at some point the trickle of people heading to the exits turns into a flood, as people give up and decide to cut their losses. Now expectations have reversed, and people are expecting prices to go down.

Disclaimer: This does not mean that a crash is imminent - prices could keep rising for years to come, or they could stagnate for years instead of falling. So I'm not saying that nobody should buy. If you're planning to buy a place and stay there indefinitely, it could be that the advantages of owning (secure housing and forced savings) instead of renting are still worth it, even with the risk of a capital loss.

If this picture of an overheated housing market is accurate, what are the implications?

In normal times, when prices are stable, the advantage of home ownership vs. renting is that you have secure housing, and you have a forced savings plan. Kerry Gold, writing in 2013, when Vancouver condo prices were stable:

As many condo owners who purchased five years ago and are trying to sell today can attest, the equity simply did not materialize. They are often breaking even, or selling for slightly more or less. Today, a condo in Vancouver is no longer viewed as a winning investment, so much as affordable housing and forced savings plan.

It's widely believed, but false, that renting is "throwing your money away." To compare the cost of home ownership to the cost of renting, a rough guide is the 5% Rule: the annual non-recoverable costs of home ownership are about 5% of the price of the home (1% property tax, 1% repairs and maintenance, 3% cost of capital).

In this overheated market, prices have been rising faster than rents, so in Metro Vancouver and the GTA, it turns out to be much cheaper to rent instead of owning. You're giving up the possibility of speculative gains ("buy high, sell higher"), but as an investment, real estate has a lot of disadvantages. So if renting and investing is an option at all, it's worth considering seriously. Summary of Alex Avery's The Wealthy Renter:

Avery also has some comments on specific real estate markets.

I posted this (and labelled it as a "rant") on /r/canadahousing. Some of the comments were quite interesting, with people arguing that their expectations of indefinite rapid growth in home prices were in fact realistic!

Shiller lecture on housing and the financial crisis. I've linked to the most interesting part, where he describes the role of complacency - in 2005, people found it unthinkable that housing prices could crash. In Canada we have the benefit of seeing what already happened in the US!